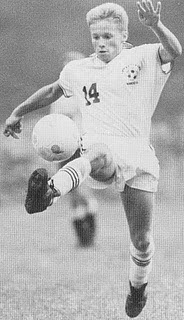 Chris Schreiner was a 3-year varsity starter for Lower Merion’s soccer team in 1986, 1987, & 1988. The team’s record during those years was 61-7-14, while winning 2 Central League Championships, a District One title, and a PIAA State crown. For the 3 years Chris recorded 24 goals & 22 assists, and in his senior year he was a co-captain, MVP of the team, and was chosen to the 1st team All-Central League, the All-State team, and was named a high school All-America pick. He still holds the LM school records for most games played in a career, 81, and most playoff games played in a career, 24. And amazingly this was in 3 years, as freshman weren’t allowed to play varsity at that time.

Upon graduation Chris attended Mercer College, where as a freshman, in addition to many other accolades, he was chosen 1st team All-American. After leaving Mercer he played for St. Mirrin F.C. in the Scottish 1st division for 2 years, and then for Aberdeen F.C. in the Scottish Premier League until he was injured and had to return to the states.

After his playing career was over Chris was an assistant coach at Cabrini College for a year, assistant varsity coach at LM for 4 years, head coach for another 5 years, and then coached the Harriton girl’s soccer team for 5 years.

Chris is now a teaching assistant at Lower Merion High School and lives in Belmont Hills with his wife Rosemarie and his two little girls Sophia and Abby.  He has still stayed active in the community soccer program as an assistant coach of the U-13 Lower Merion Magic.