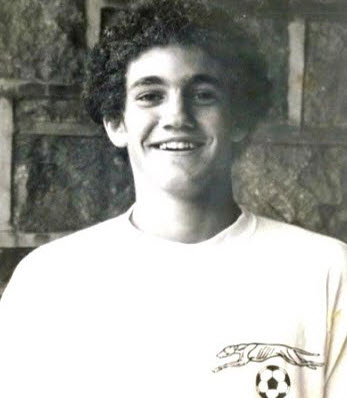 Doug was a 3-year starter for Lower Merion from 1973-1975. As a sophmore forward he earned All-League recognition. Doug moved up to midfield as a junior, and, scheduled to be the go to guy in the middle for the Aces, he sustained broken bones in his right foot in the first game of the season. Despite playing hurt the entire season, he still managed good numbers and helped keep LM in every game. As a healthy senior co-captain, he led the Aces to their first winning seasons in several years, and was named 1st team All-Central League. He was also named to the All-District team, and chosen as the team MVP.

Doug won a total of 5 varsity letters while at LM, and, as a senior, he won the Dave Erickson Outstanding Player award as the 3rd baseman for the LM baseball team.

After Lower Merion, Doug was a 4-year varsity starter at center midfield for Moravian College’s men’s soccer team. In a distinguished career, the Moravian team went 38-16-9, was often nationally ranked, and played in the post-season playoffs in 3 of his 4 years. Over his college career he accumulated 30 goals and 15 assists, playing out of the midfield. In both his junior & senior seasons he was chosen 1st-team All-Middle Atlantic Conference, as well as also being named conference MVP both years. As a senior co-captain, Doug was named NCAA Player of the Week during the season, and achieved 1st-team All-America status.

During both his high school & college careers, he served as a coach & referee in the LM recreation youth soccer association, assisted numerous clinics, and coached for the Middle States Soccer Camp at Ursinus College. He was also the associate director for the Bethlehem recreation department’s Soccer-at-Night program for disadvantaged children.

Doug has worked and served for the past 20 years in public school, university, and college dining services, winning numerous achievement awards. He is currently the Senior Regional Director for a nationwide dining service contractor, and lives in Overland Park, Kansas, with his wife Joanne. They have 4 grown children living in various cities in the eastern United States.