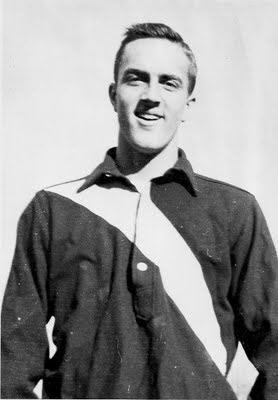 John played defense (left fullback in those days) for the Aces, and was a 3-year starter in ’42, ’43, & ’44. During that time his teams won the Suburban One league all 3 years, compiling a total record of

35-6-5. In his senior year John was chosen captain of his team, picked for the All-Suburban league 1st team, as well as being named to the All-Scholastic team. Also, in that ’44 season, John, along with his teammates, only allowed 5 goals the entire season (still sharing an LM team record with the ’67 team), including going unscored upon in league play.

After the ’44 season, John played on the American Reserves/Hosiery club team, until he entered Lafayette College in the fall of ’45. At that time, because of World War II, Lafayette had temporarily dropped the men’s soccer program. Undeterred, John asked for a key to the uniform bin, recruited players from around campus, and temporarily reinstated the program for a 4 game season.

After that season John went into the service for a year and a half, during which time Lafayette hired a new soccer coach to keep the program going. When John came back, he was named the co-captain of the team, and in his senior year was chosen to the All-America 2nd team, and awarded one of the first “Hurlbert Awards” at Lafayette.

After college John joined the Germantown Cricket Club team, who dominated the league for years, and who played one year in an international tournament in Bermuda. After 5 years he joined the Merion Cricket Club team, became chairman of soccer, and started an area youth soccer program for boys & girls. In 1968, John started the first junior boy’s club soccer team in Lower Merion, and in 1972 did the same for the girls. He coached youth soccer for 15 years, and was awarded the “Pioneer Award” by the Delco Soccer League. John continued to play in the Cricket Club League until he was 45, and was a big international soccer fan, going to the World Cup in France in 1998. And in the early 60’s, when the US women’s team was in it’s infancy, he saw them play their 1st international match against China at the UGH field up in Neshaminy.

John is currently a quantitative choice portfolio manager for Wells Fargo in Philadelphia, and lives in Gladwyne with his wife Peggy. They have 2 grown children, a son John III, who lives in Cheltenham, and a daughter Amy, who is based at Fort Bragg, CA.